The Krkonose Mountains have been a destination for many Czechs since their childhood; yet very few people know them also from the Polish side. While in the Czech Republic the mountains slowly drop through their foothills to the lowlands, they are quite steep in Poland, giving a grandiose impression. The landscape in Poland includes glacial lakes, waterfalls and small and lively mountain towns.

Let us inspire you to discover the mountains and their foothills on the Polish side of the Krkonose.

Entry to the Polish national park (Karkonoski Park Narodowy) is subject to a fee. You can buy tickets in electronic form.

Dogs must be kept on a lead. No dogs are allowed in the Polish part of the Krkonose without a lead and muzzle.

If you need advice or printed material about the Polish Krkonose, feel free to visit the information centres in Jelenia Gora, Karpacz, Kowary and Szklarska Poremba. 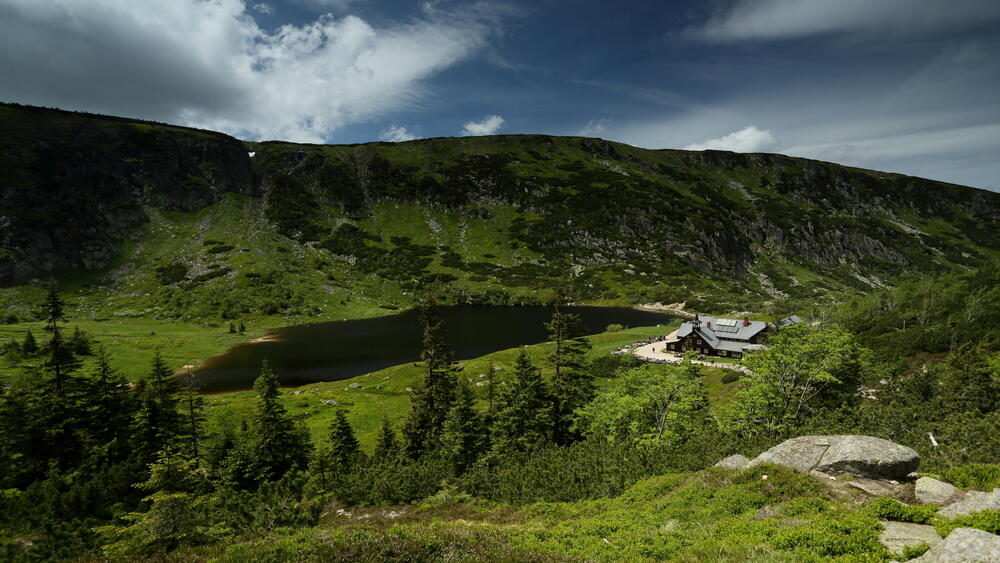 Samotnia chalet is located by the Maly Staw lake on the Polish side of the Krkonose mountains at an altitude of 1200 m a.s.l., and is one of the oldest chalets in the Krkonose in Poland. Tourists can enjoy the quiet atmosphere of the chalet and home cuisine. As Samotnia lies in the Krkonose National Park between the town of Karpacz and Snezka Mountain, it is only accessible by foot. The first written records on a building by the lake date back to 1670. Over the course of centuries the chalet was repeatedly redesigned, the latest extension being completed in 1934.

This wooden Protestant church can be seen on the Polish side of the Krkonose, in the upper parts of the town of Karpacz. It was brought here from the Norwegian town of Vang, where it had been built in 1175. By 1841 it had become too small for the Norwegian settlers, who decided to have a new brick church built. They originally wanted to sell the old church as firewood, but a Norwegian painter, Johan Christian Dahl, a professor at the Academy of Creative Arts in Dresden, appeared at the auction and decided to save the church. It was eventually moved to the Royal Museum in Berlin with the support of the Prussian King Friedrich Wilhelm IV, who had communicated with Countess von Redern. She mentioned that the Evangelical citizens in the mountain villages in her demesne needed a new church. The building was moved piece by piece in the spring of 1842 to Legnica and from there via Jelenia Gora to Karpacz. A new spire was added and the church was consecrated in 1844. It is a so-called stave church, where the roof truss is carried by tall posts instead of external walls. Once they have been processed, they are left for 12 years exposed to rain and wind, and then impregnated with wood coal tar. After this treatment, the posts can be used for over 800 years. 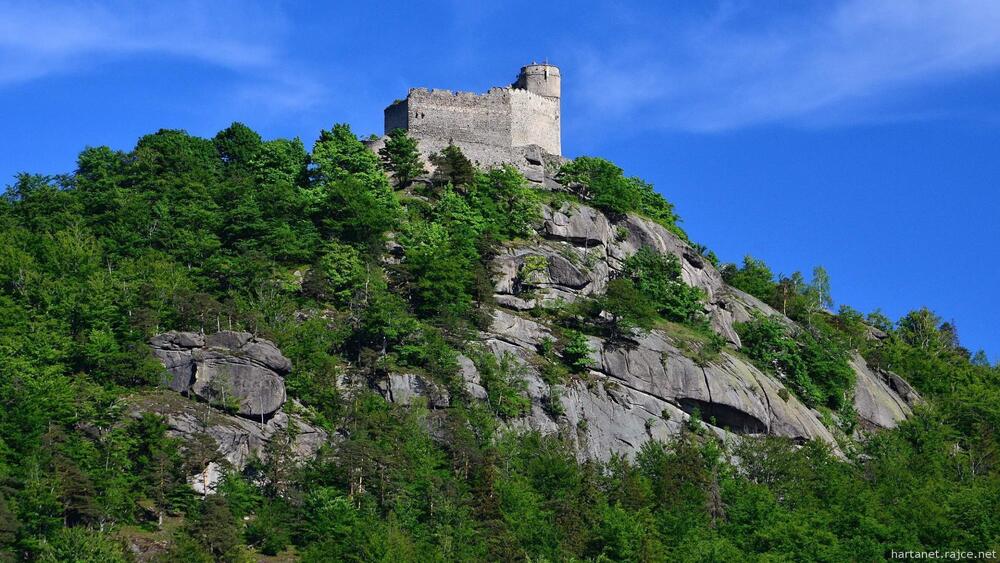 The ruins of Castle Chojnik can be seen at an altitude of 627 m a.s.l. above Sobieszow village, today a part of Jelenia Gora, and is one of the greatest tourist attractions on the Polish side of the Krkonose. The first written records on Castle Chojnik date back to the 14th century, when it was founded by Count Bolko II, the governor of Swidnica and Jawor. His widowed wife passed the property onto Gotsch Schaff, a predecessor of the well-known Silesian family of Schaffgotsch. The family owned the castle until 1675, when it burnt down, after which it was never renewed. In the 20th century the castle was repaired and is now open to the public. 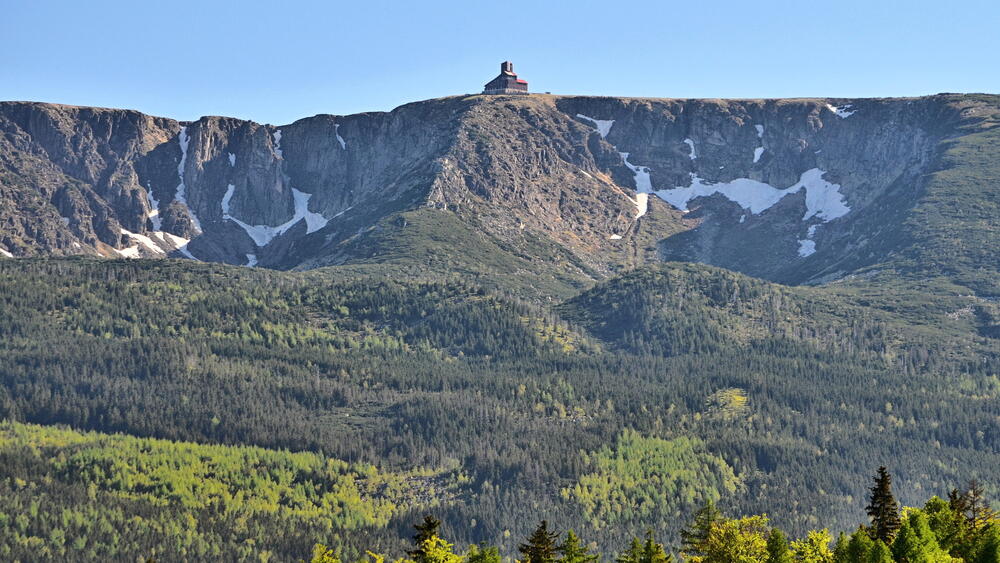 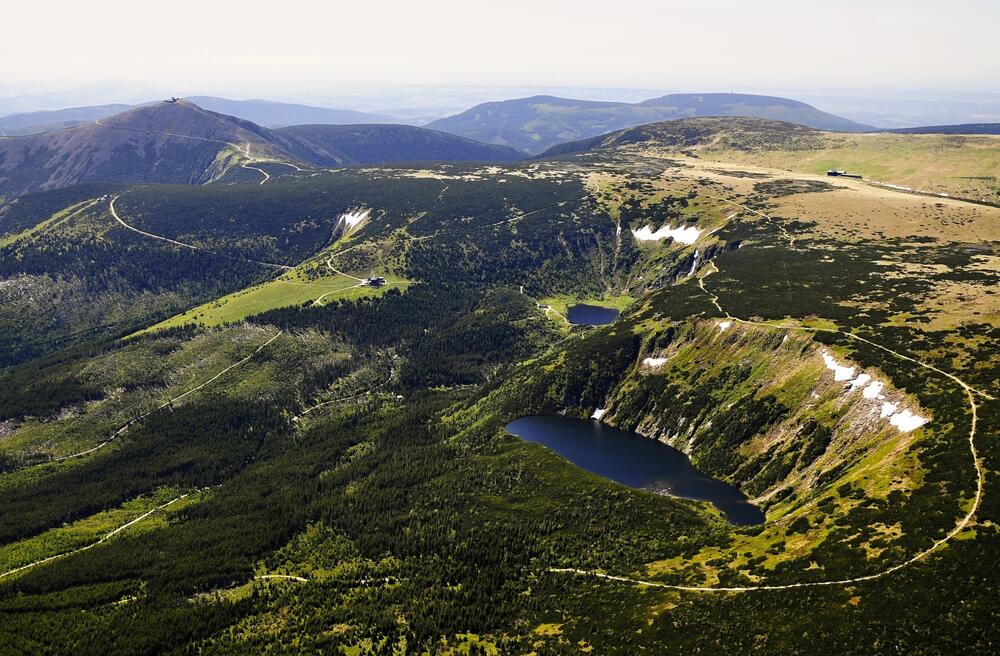 The Wielki Staw and Maly Staw (Big Pond and Small Pond) fishponds can be found on the Polish side of the Krkonose below the Czech-Polish friendship path between Poledni kameny rock formations to the place where the yellow-marked Janova path joins. Wielki Staw lies at an altitude of 1225 m a.s.l. and covers an area of 6.5 hectares with a depth of 23 m. It is the largest glaciated lake in the Krkonose, with the bottom made of scree and patches of sand. Maly Staw is at an altitude of 1183 m a.s.l., with an area of 2.9 hectares and a depth of only 6.5m. The water in both lakes has the colour of jade and its physical properties are similar to those of water in Alpine lakes which are covered in ice for 190 days a year, such as Silser-See in Switzerland, which lies some 600 m higher. Kotel formations above both fishponds, and Velka Snezna jama are among the most perfect corrie formations in the Polish part of the Krkonose. 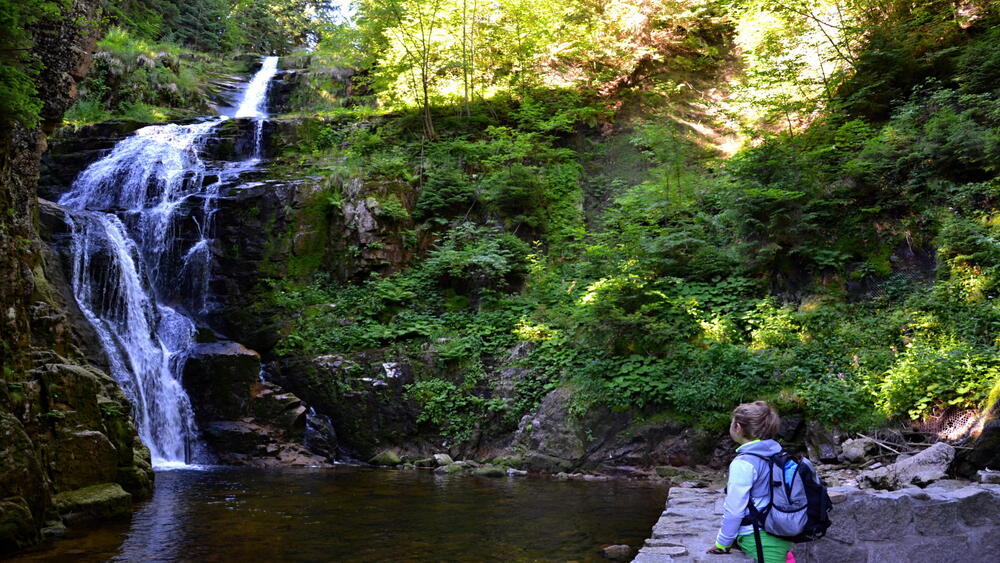 The sources of the River Kamienczyk are in the upper parts of the Hala Szrenicka enclave at an altitude of 1260 m a.s.l. When many nameless tributaries merge into a stream, it flows through a stony riverbed through a remarkably modelled valley. At an altitude of 840 m a.s.l. there is a three-step cascade waterfall, with its height of 27 m making it the highest in the western part of the Krkonose. A deep gorge under the waterfall, nearly 100 m in length, was created by backward erosion due to a gradual regression of the waterfall head. 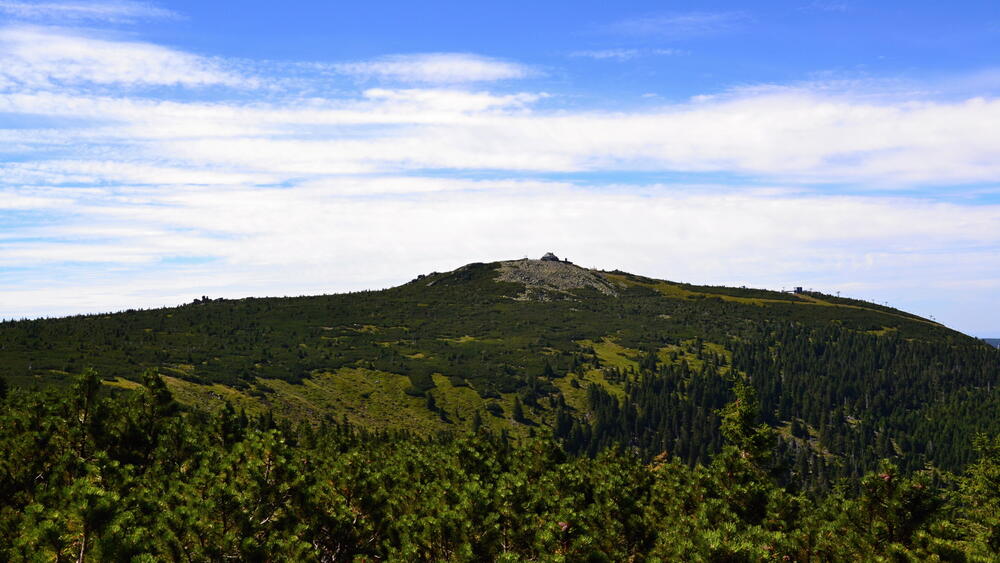 Szrenica (1362 m a.s.l.), also known as Jinonos in Bohemia, is the landmark of the western side of the Krkonose, being slightly detached towards Poland from the border ridge. Its pointed summit is accentuated by a mountain chalet near the chair lift from Szklarska Poreba and is also accessible via many hiking paths, including one which leads from the tourist border crossing near Vosecka chalet. Szrenica features granite rock formations, so-called tors. An articulate outcrop called Trzy Swinki, known as Svinske kameny in Bohemia, can be seen right on the state border on the mountain’s south-western side. An even more attractive site is a formation of huge rocks on the northern mountain side, called Konskie Lby, i.e. Horse Sculls. The actual summit of Szrenica is covered in a thick layer of rocks. 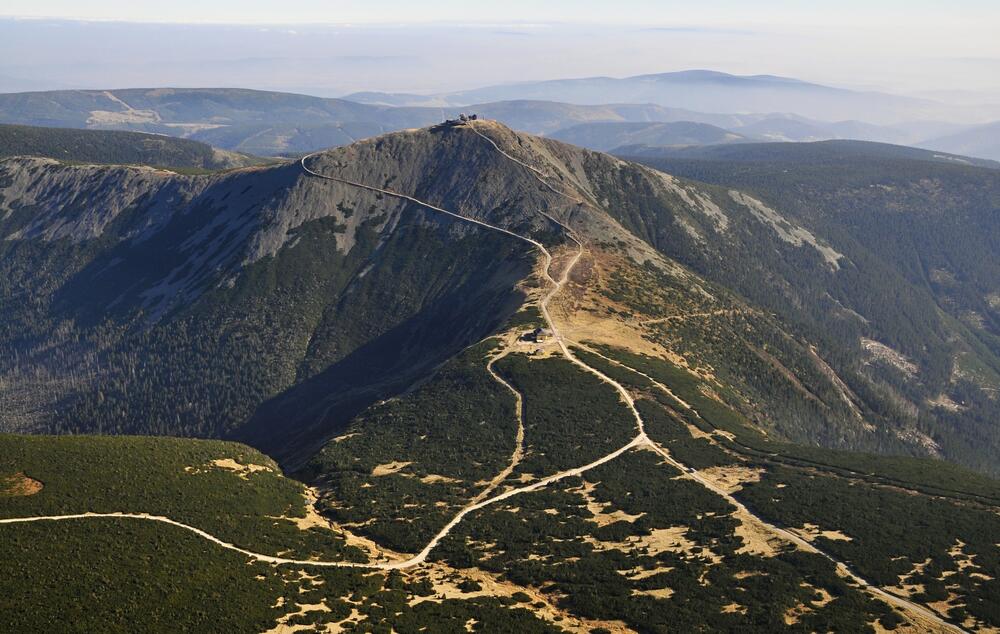 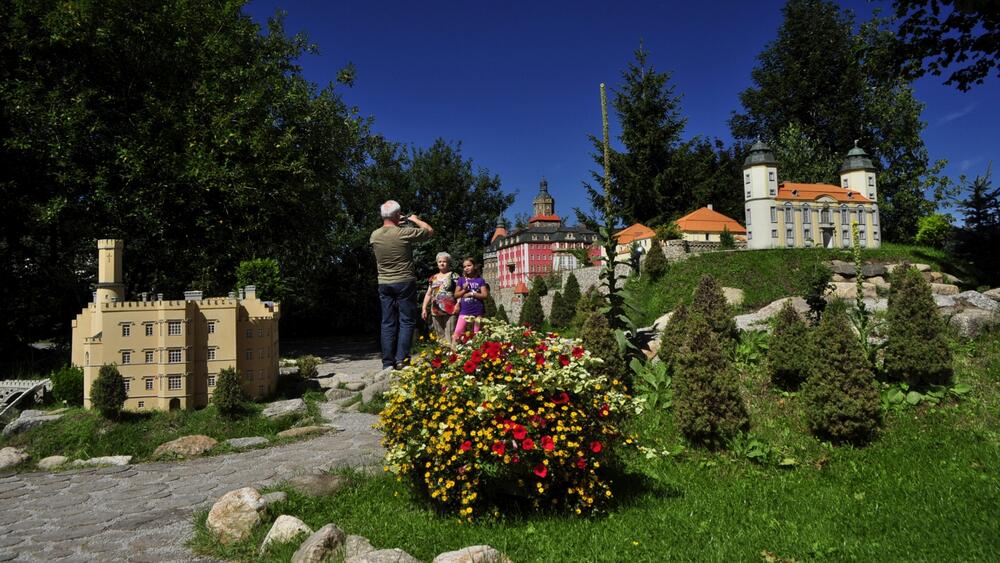 The Lower Silesian Miniature Park in Kowary is located on the site of a former carpet factory. The Park features miniature models of 40 Lower Silesian architectural monuments, such as churches, monasteries, castles and chateaux, all of which are at a scale of 1:25. Each miniature has a caption giving the history of the monument. The models are located in the open air thanks to the use of the latest technologies and materials which can withstand weather effects. The entrance fee can be paid in CZK, too, depending on the current exchange rate between the Czech and Polish currencies.

Everywhere the Wroclaw Pantomime Theatre gave performances, its founder and long-term director, Henryk Tomaszewski, used to buy toys. Henryk Tomaszewski was not an ordinary collector, and neither is the museum which he founded in 1995 in Karpacz an ordinary museum. The dolls are housed in showcases designed as styled burgher houses. You can see a town of dolls, its streets full of shops and cafes, stroll by the theatre, bakery, pharmacy.

This museum in the village of Jagniatkow is located in Villa Wiesenstein, where Gerhart Hauptmann, a well-known German writer and a Nobel Prize winner, lived from 1901 until his death in 1946. The Neo-Renaissance house was built by Hans Griesebach, an architect from Berlin. The villa is situated on a granite rock and surrounded by a nature park 1.6 hectares in size. The villa was built with the idea of providing the owners with a view of the Krkonose ridges.

From Gerhart Hauptmann’s death until 1997, the house was used for children’s convalescence and holiday stays. After 1989, an agreement was concluded between the German Chancellor, Helmut Kohl, and the Polish Prime Minister, Tadeusz Mazowiecki, which laid out a plan to use the villa for museum purposes. A museum was established which focuses on the cultural heritage of the Lower Silesian region, emphasising the significance and work of the writer Gerhart Hauptmann.

Link to mapy.cz: The House of Gerhart Hauptmann

This building is one of the most well preserved towers of its type in Central Europe. Its construction most probably started at the time of Duke Henry I. of Jawor in 1313–1314, who probably also donated the exceptional mural paintings in the great Knights Hall on the 2nd floor.

The murals were uncovered in 1880. What makes them remarkable is that they depict profane themes which very rarely appear in temporary iconography. Art historians have long discussed the contents of the murals. The most likely explanation is that the Knights Hall is decorated with scenes from the story about the most important of the Knights of the Round Table, Sir Lancelot du Lac. The murals were created using the ‘al secco’ method, where the painting is made in a dry plaster, a method typical for Transalpine regions in the High Mediaeval Ages. The polychrome paintings in Siedlecin are the only mediaeval cycle of paintings in Europe, representing the story of a Knight of the Round Table, Sir Lancelot du Lac. The artist may have come from northern Switzerland.